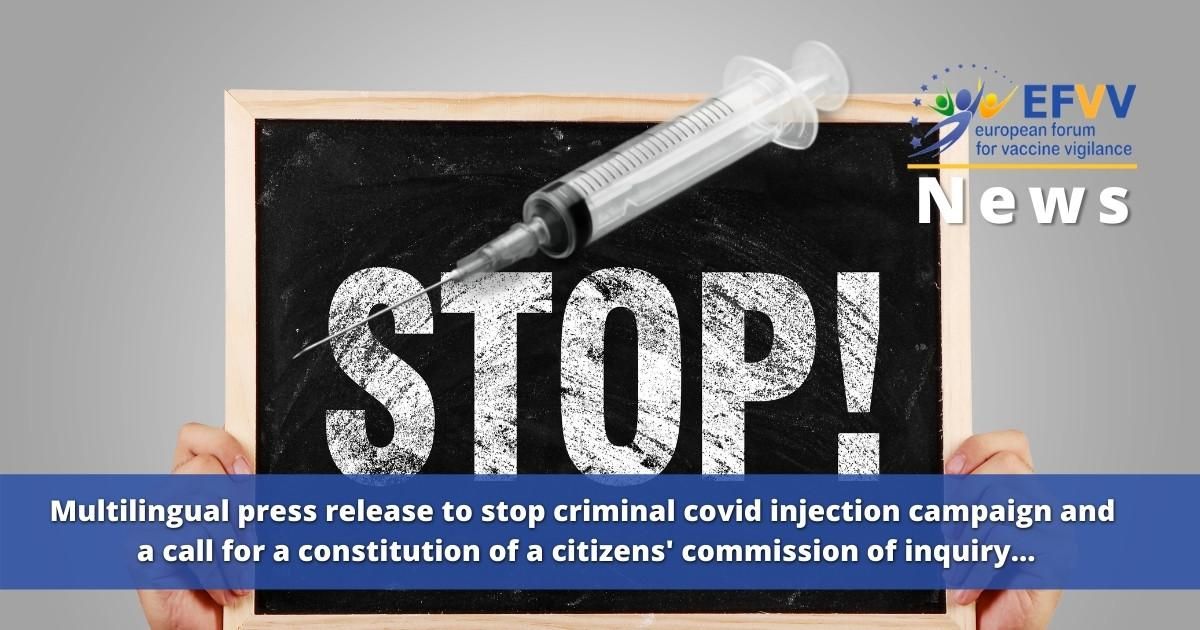 Under the aegis of the European Forum for Vaccine Vigilance (EFVV) and during the first meeting in Paris and by teleconference of the International and French Scientific Council for Evaluation of Covid-19 Policies, a group of scientists, lawyers, intellectuals, health care professionals, officials and citizens unanimously adopted a motion to create an International Citizens’ Inquiry Commission.

One of the primary objectives of this decision was to pull together the expertise, experience, know-how and soft skills of the various existing movements which have emerged during this health crisis and apply them to the development of concrete health and strategic solutions.  These will be scientific, legal, military security and political solutions, to be applied on the ground, with and for the people.

Experts in various fields and speakers attending either in person or by teleconference took the floor to voice their experience of Covid-19 and highlight the circumstances and consequences of events observed in 2020 and 2021 to date.  The international Commission then worked on the development of concrete proposals.  Consideration of these scientific, socio-economic, political and legal testimonies, along with the lack of justification for passing the state of emergency law and the organisation of an enforced dangerous experimental vaccination campaign - undoubtedly fatal for many, resulted in a demand from those attending for an immediate end to all vaccination campaigns in France and worldwide.  The unanimously voted international citizens investigation commission will consolidate the material necessary to incriminate those responsible, whether directly or as an accomplice, for this organised massacre.  There is already quantifiable evidence to prove this crime.

This meeting followed the Annual General Meeting (AGM) of the French Ligue Nationale pour la Liberté des Vaccinations (National League for Freedom of Choice in Vaccinations), chaired by Jean-Pierre Eudier.  The AGM was attended this year by a large number of the group’s members who voted to approve the creation of this commission, pledging their active support for the project.

In his introductory speech at the opening of this first meeting of the Scientific Council for Evaluation of Covid-19 Policies, Dr. Jean-Pierre Eudier stressed the very urgent need to perform an inventory of all testimonies, findings and consequences available to date and to take action.  The situation now being extremely serious and urgent, the time is no longer for procrastination but for immediate firm and resolute action to protect people before it is too late.  Comparing the current situation to the Rwandan genocide on day D-1, Dr. Eudier reminded those attending of the speed of events, unsuspected on the eve of such a horrible massacre.  He quoted General Roméo Dallaire, Commander-in-Chief of the UN peacekeepers, who witnessed the astounding speed of events.  After reporting the lightening speed genocide and his powelessness faced with the destructive force of the hatred between the Tutsis and the Hutus, General Dallaire said “Seismic change evolves over a lifetime or it can happen in an instant!”

Dr. Eudier added that today we have reached this point in time with the Covid-19 crisis and that the creation of the International Citizens’ Investigation Commission is one of the imperative responses to this terrifying situation.

His speech is transcribed in full below.

Before coming to the purpose of this meeting, I would like, by way of introduction, to share a few thoughts on the current, particularly serious situation which has brought us together today.

A spirit of division emanates today from our public authorities.  No one can possibly have missed how health policies and particularly the drive towards a vaccine mandate, are pitting individuals against each other, tearing relationships apart and even instilling conflict within families.

Divide and conquer is a well-known technique for obtaining and maintaining power.

I have seen this technique at work in Africa, a territory I know particularly well since I lived and worked there for 40 years.  Let me cite as an example the tragedy of Rwanda.  An effort to divide was deliberately organised to trigger war between the Hutus and the Tutsis, two tribes who had lived in peace, in the same country, for many long years, one consisting of animal farmers and the other crop farmers.  Tension first broke out during the Belgian colonial era when the financial interests of those who wanted to plunder the country deliberately pitted these two groups against each other, to divide, conquer and loot.

The international community was repeatedly warned of the growing tension between these two communities but nothing was done.  When the UN arrived to ensure peace, alarming information was sent back from the field to warn of imminent civil war, in particular from Canadian General Roméo Dallaire who was in charge of the operations.  But the Canadian general did not have the authority to intervene; he had no choice but to stand powerless, witnessing the escalation of tension into civil war.  At the time, the radio and television station, Radio-Télévision des Mille Collines (RTML), similar to BFMTV in France today, played a fatal and now well-identified role.  For example, an extract from an article in French newspaper Le Monde (published in April 2019) reports: “Radio-Télévision des Mille Collines broadcast hate, timidly at first, then totally explicit.  Names were given of people to kill, rewards were offered for corpses and the militiamen were encouraged to massacre: “You will set the Tutsis on fire and they will regret being born…Do your best!”, “The pits are still half empty; they need to be filled!”  Le Monde concluded that “RTLM played a capital role in this 1994 genocide in which, according to the UN, 800,000 moderate Tutsis and Hutus lost their lives”.

I would like to point out that our great national newspaper appears today to have become a voice of disinformation for the general public.  Like many other media, it is taking part in the effort to create division between those who are pro-vax and those who are “anti(or rather for freedom of choice in)-vax.

Must history repeat itself?  Are we about to see civil war break out in France or in Europe?  I fear that this may sadly be the case and I am not the only one in our health freedom associations to feel this way.  In his book Les Vaccins à l’ère du Covid-19 (Vaccines in the Covid Era) Michel de Lorgeril mentions the possibility of civil war in the event of a Covid vaccine mandate.  In his opinion, the tension between pro-vax and anti(or freedom of choice in)-vax has been gradually increasing since 2018 when 11 vaccines were mandated for French children.

Within our association, we witness daily the distress of families experiencing blackmail and pressure.  Parents are subject to court orders stripping them of their parental rights with the imposition of immediate vaccination of their children.

With the current health crisis, we are witnessing how the media spin a constant pro-vax narrative geared to the imposition of a universal and undifferentiated vaccine mandate with no regard for individual biological status.  In our opinion, this is nothing short of a biological, sociological and medical aberration.  Like General Dallaire in Rwanda, some scientists and lawyers are warning the public authorities of the health and sociological risks of a vaccine mandate but there is nothing they can do.  They stand powerless as they witness the growing division of society.  Their voices are overpowered by the mass media which, as Radio Mille Collines was able to do, pit people against each other.  According to our media and the experts interviewed on television, there are two kinds of citizen:

In spite of the initial political discourse which reassured us that freedom of vaccine choice would be maintained, mandatory coronavirus vaccination is looming on the horizon.  Yesterday, as I was listening to France-Inter, it was clear how the bill is being clarified.  Here again, it is all based on figures shamefully manipulated in an effort to justify such a mandate.  In our opinion, this is criminal.

At the same time, we are seeing rising concern in the general population at the prospect of a vaccine mandate.  Whatever the media say to persuade us that people are queuing up outside the vaccination centres, our belief is that people are afraid of this vaccine.  They fear not only losing their health but also their jobs.

Those who contact us are reporting an increasing number of adverse effects amongst their relatives, friends and neighbours; even sometimes these people are suffering themselves.  Reportedly, never in the history of vaccination has a vaccine caused so much damage.  Yesterday morning, I received a report from a law firm specialising in compensation for medical accident victims.  They say they are now receiving increasing numbers of claims from families: death, thrombosis, heart attacks.

Faced with denial from the authorities and from prescribing physicians and vaccinators, the Ligue is increasingly solicited…whether for the 11 compulsory childhood vaccines or for the Covid-19 vaccine, these are currently the two battles we fight.  We have no solutions, no messages of hope to offer.  This powerlessness we feel is shared by so many people in France and worldwide.  It’s an absolute impotence, so deleterious because these people have no association to support them and no legal recourse!  Where do they turn?

Many families have already had to cope with genuine tragedy caused by the childhood vaccines, others are now discovering the horror, the enormous risks of the Covid-19 vaccine.  Increasing numbers are now enlightened.  They are becoming aware of the crime perpetrated not only against their physical integrity but also against their values.  Will they allow it to continue?

This brings me to consideration of how this crisis will evolve if the vaccine is mandated.  I only see two options:

This is why we are calling all scientists, lawyers, politicians and the media to open their eyes, ears and hearts to this most alarming situation which has compelled us to draft a strong message demanding an immediate end to this criminal vaccination campaign.

We also call for the creation of a citizens’ investigation commission and possibly a lawsuit to judge those responsible for the current and future disaster.